Flying girls, fairies radiating light in their dance routine in the twilight, death of a bird in a local hospital, monologues with the dead and the fairy, Iqbal Hasan introduces a host of extraordinary situations and characters in his mesmerizing tales of everyday life in his new book Remand, Cockroaches, and the Fairy. Rich and startling, magical and lyrical, the latest collection of short stories is Iqbal’s tour de force. Ziaul Karim reviews the beautifully distilled pieces of writing in the collection.

He writes of a boatman whose ore is being snatched by fairies, of zero gravity of existence when darkness invades the head of villagers who wait for angels in white gowns to return to their village, and above all, of everyday moments teeming with magical oddities.

‘Remand’ tells us how four boys in their early teens raided the nest of a bird in the dead of the night, tortured the animal and left the lifeless body to the cold veranda of the hospital’s emergency. The next day newspapers carried the death news as: A bird died of heart failure while in remand of some naughty boys. The bird enraged the boys with its love of freedom, the audacity to hold its head high and to fix its gaze towards the sky. The ‘Remand’ is a brilliant satire of how power silences free spirit.

In the ‘Cockroach’ we meet a couple whose troubled married life ends in the death of the wife. The story begins with the wife being pissed with cockroaches, but the husband fails to see any. In the next scene we find the husband in a park outside of the hospital, and are informed that it is a mental hospital. As the story goes on we get confused who is mentally ill, the husband or the wife. At the end the husband inquires why she had left him. The wife who has committed suicide talks to him and tells him that it is his adulterous life that has left no reason for her to live. A deep longing for love and be loved hangs throughout the disjointed and fragmented prose of the story. Apparently simplistic, what keeps the story going is Iqbal’s ability to peep into the inner psychology of human relations and to plumb the images from the depth of the subconscious.

After twenty-five years of publication of his Booker-winning novel The Famished Road, the Nigerian author Ben Okri has recently written that, ‘Often the wonder of living fades from us, obscured by a thousand things. I wanted to look at life afresh and anew and I sought a story that would give me the right vantage point.’ Iqbal infuses this wonder into the mundane and adds magic to the ordinary.

He was a journalist in his prime in Dhaka, the capital city of Bangladesh and journalism is to remain a passion throughout his life. He learned the craft of story-telling from journalism. Now settled in Canada, his stories mostly revolve around the villages and lives on the banks of river Kirtankhola in Barisal, his birthplace in south-central Bangladesh.

In ‘The Fairy’, we again encounter a couple where the husband is gradually losing his mental sanity. For him the boundary between the dream and the reality gets blurred. On a moonlight night he walks on the train line, into thick fog. He feels his wife’s naked hand protruding from the edge of the bed. After a while he falls asleep on the railway tracks: His wife’s gentle fingers comb his hair.
Exalted by lyricism and the ability to point towards a deeper truth coupled with an unparalleled gift of storytelling, Remand, Cockroaches, and the Fairy shows how strange and extraordinary life can be. At the end Iqbal Hasan’s short stories are a dippable delight.

Let’s go pink, For a cause! 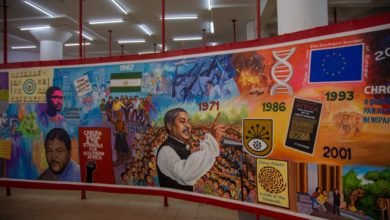